Website Website
Henderson, NV
Biotechnology
Psilothera is a pioneering mental health care company dedicated to creative, modern solutions to treat global healthcare concerns, including depression, anxiety, PTSD, eating disorders, addictions, Alzheimer’s, dementia, and more. We plan to deploy quantum technology to shorten the drug development time, which will give us an advantage over our competitors. With a focus on healing, hope, and compassion, we aim to change the paradigm of mental healthcare with their Psilocybin-based therapies.

This Reg CF offering is made available through StartEngine Capital, LLC.

Get rewarded for investing more into PsiloThera, Inc.:

Psilothera is stepping into the scene of major healthcare crisis by focusing on medical research breakthroughs and groundbreaking legalizations
The company is actively targeting a $100 billion market opportunity in Psilocybin healthcare
Psilothera is led by a battle tested management team with business model, strategy and plan driven by research and development

The world is in the throes of a mental health crisis

Recent estimates from the World Health Organization show that roughly 322 Million People suffer from Major Depression Disorder. In the US alone, 16 million people suffer from this debilitating disease. What’s worse is that up to a third of the people suffering from clinical depression are “treatment resistant,” meaning traditional antidepressants don’t treat them. This resistance is one of the reasons why 17.6 veterans commit suicide a day in the United States. With the current state of the mental healthcare industry, they have no other options for medication.

A recent Gallup poll shows that the pharmaceutical industry is the least trusted industry in America. Toxic industry norms, widespread corruption, as well as harsh side effects of mental health medicine have created a need for a viable alternative among patients and consumers. (Source) 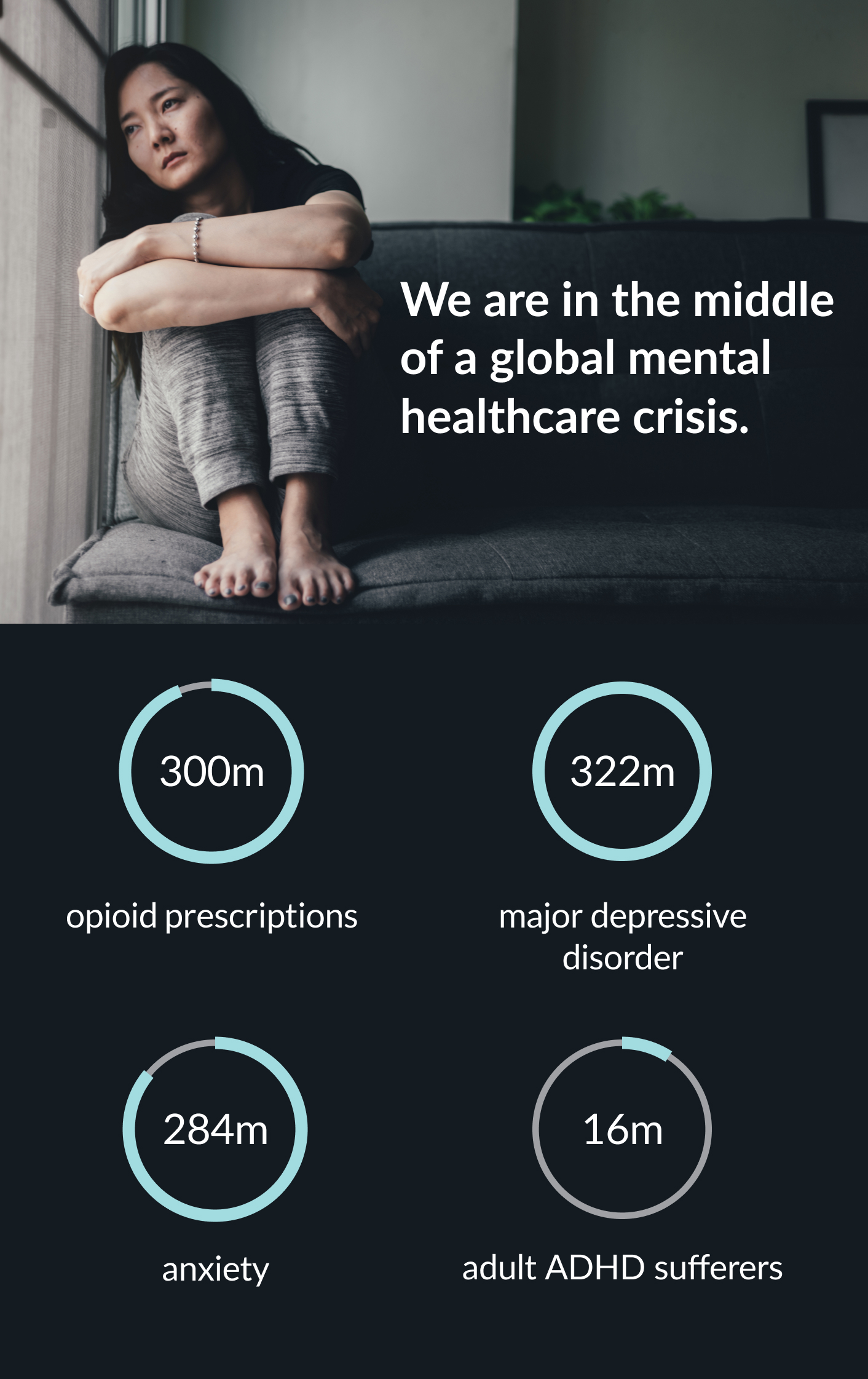 
Psilocybin-based therapy is revolutionizing the world of mental healthcare

The technique used in Psilocybin assisted therapy is microdosing. Microdosing is the regular intake of very small quantities of psychedelic substances. Microdosing is beneficial because while there are minimal acute effects reported, these substances claim a range of long-term health and well-being benefits. We believe the fear of having a “bad trip” on Psilocybin makes microdosing a more approachable option for the millions of people suffering. 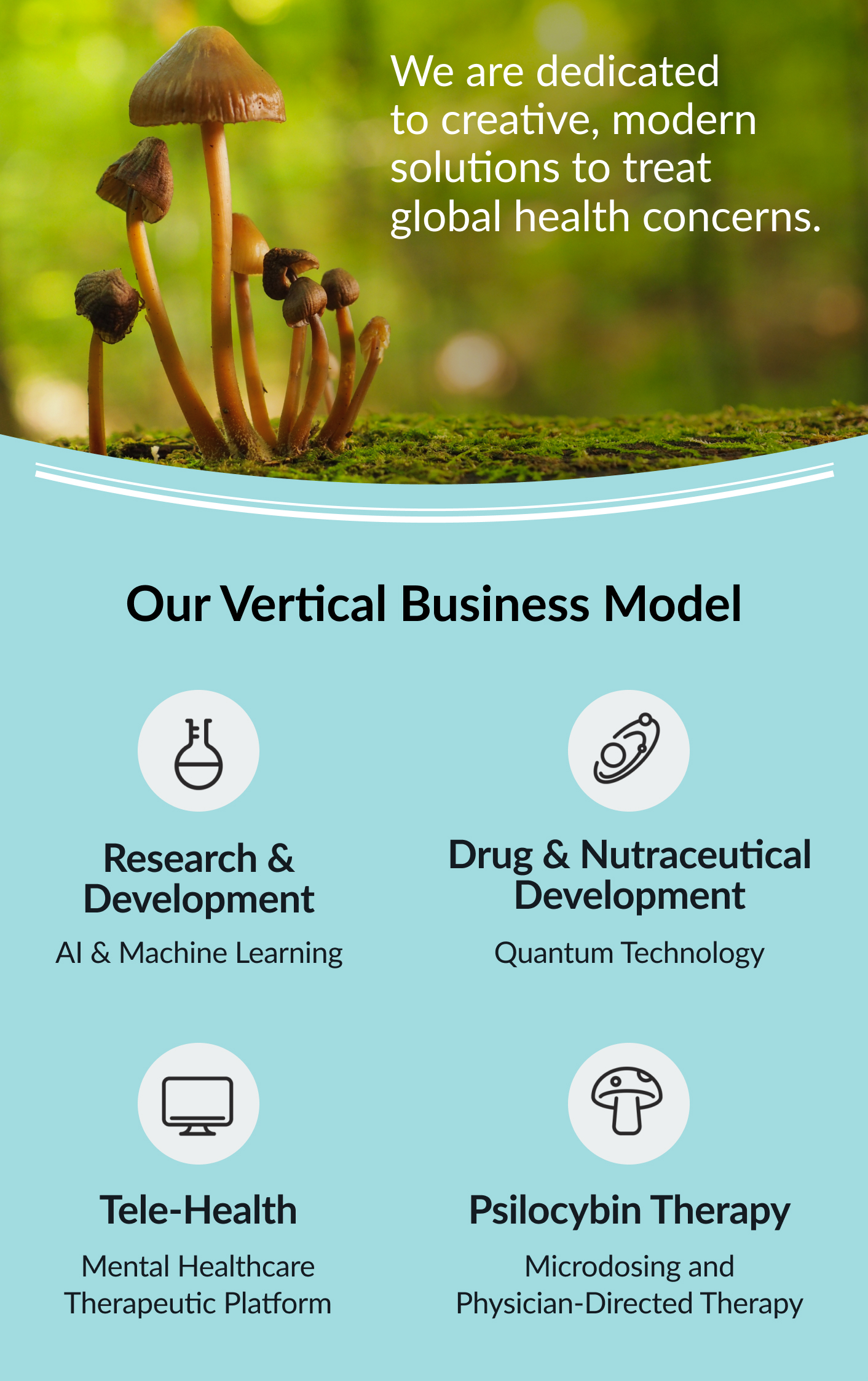 Psilothera’s battle tested leadership team is made up of entrepreneurs, mental health professionals, and mushroom farmers. This team agrees on the same mission: be one of the first companies focused on developing Psilocybin-based therapeutics while deploying quantum technology. We are currently in the final stages of procuring a technology licensing agreement with a well-known quantum technology company, which will drastically reduce the development time as well as the cost of therapeutics. 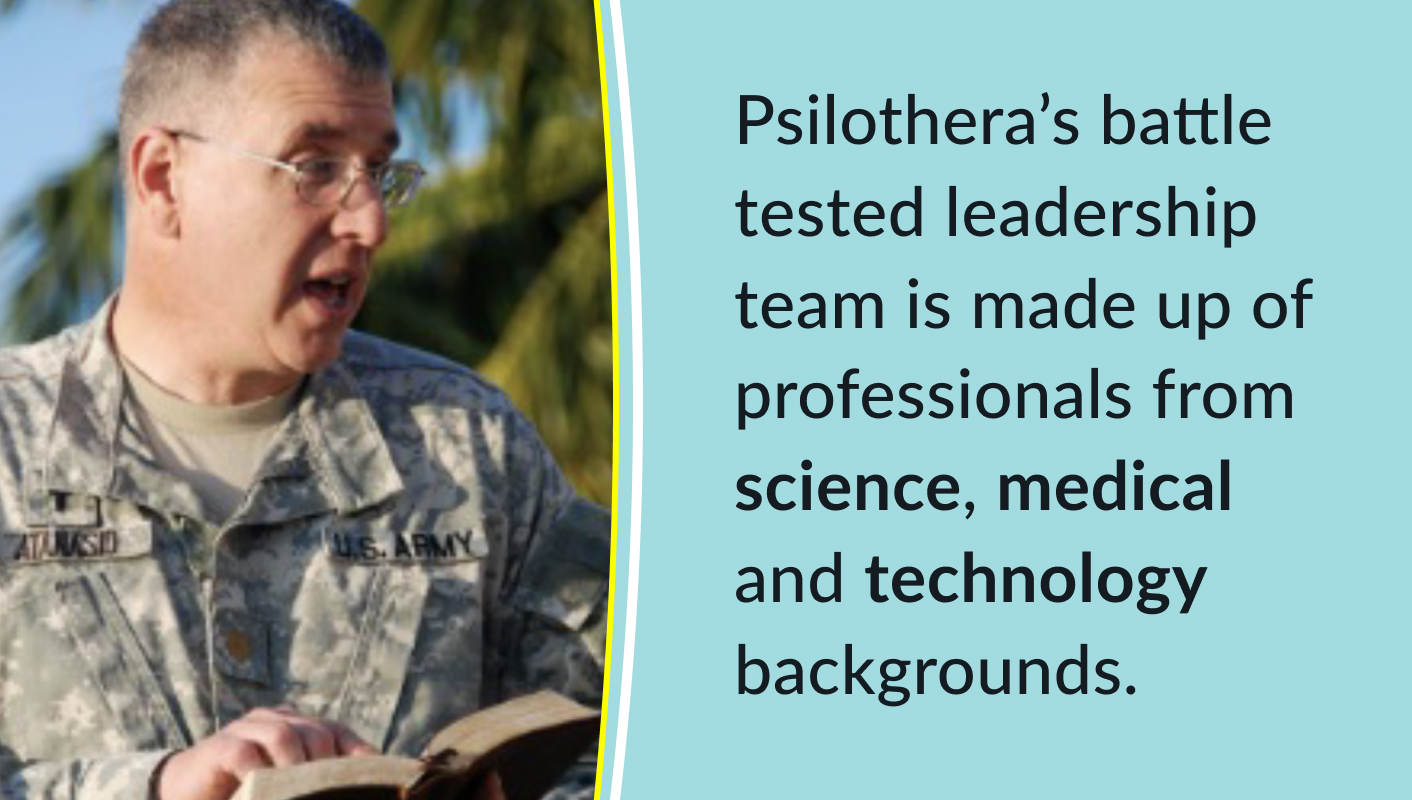 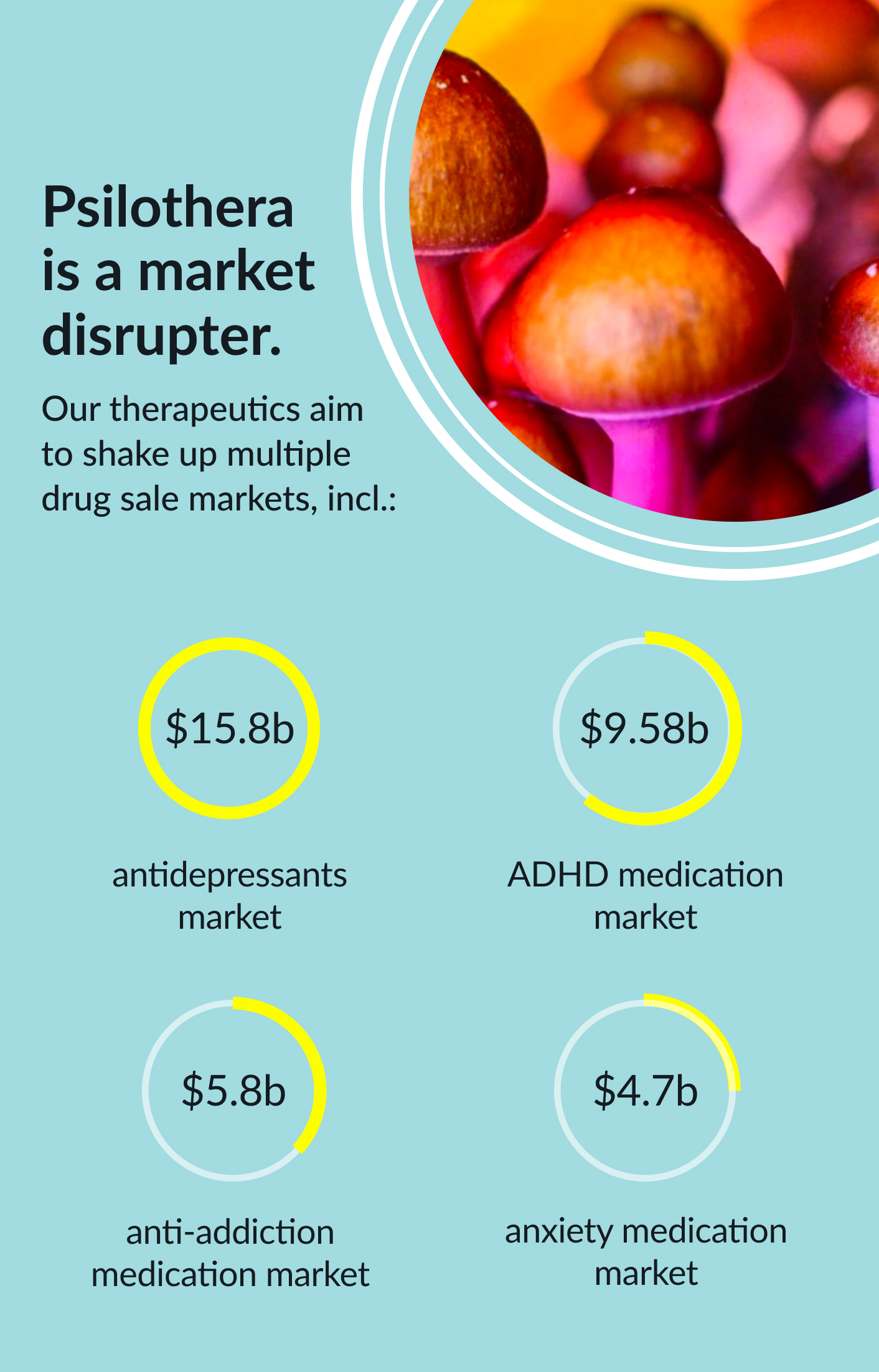 Gaining momentum by the day

Breakthrough studies by reputable programs such as Journal of JAMA Psychiatry, Johns Hopkins Center for Psychedelic & Consciousness Research, Imperial College, and US National Library of Medicine National Institute of Health have all shown promising results on psychedelics’ ability to treat long-lasting depressive, PTSD, and anxiety symptoms with minimal side effects. 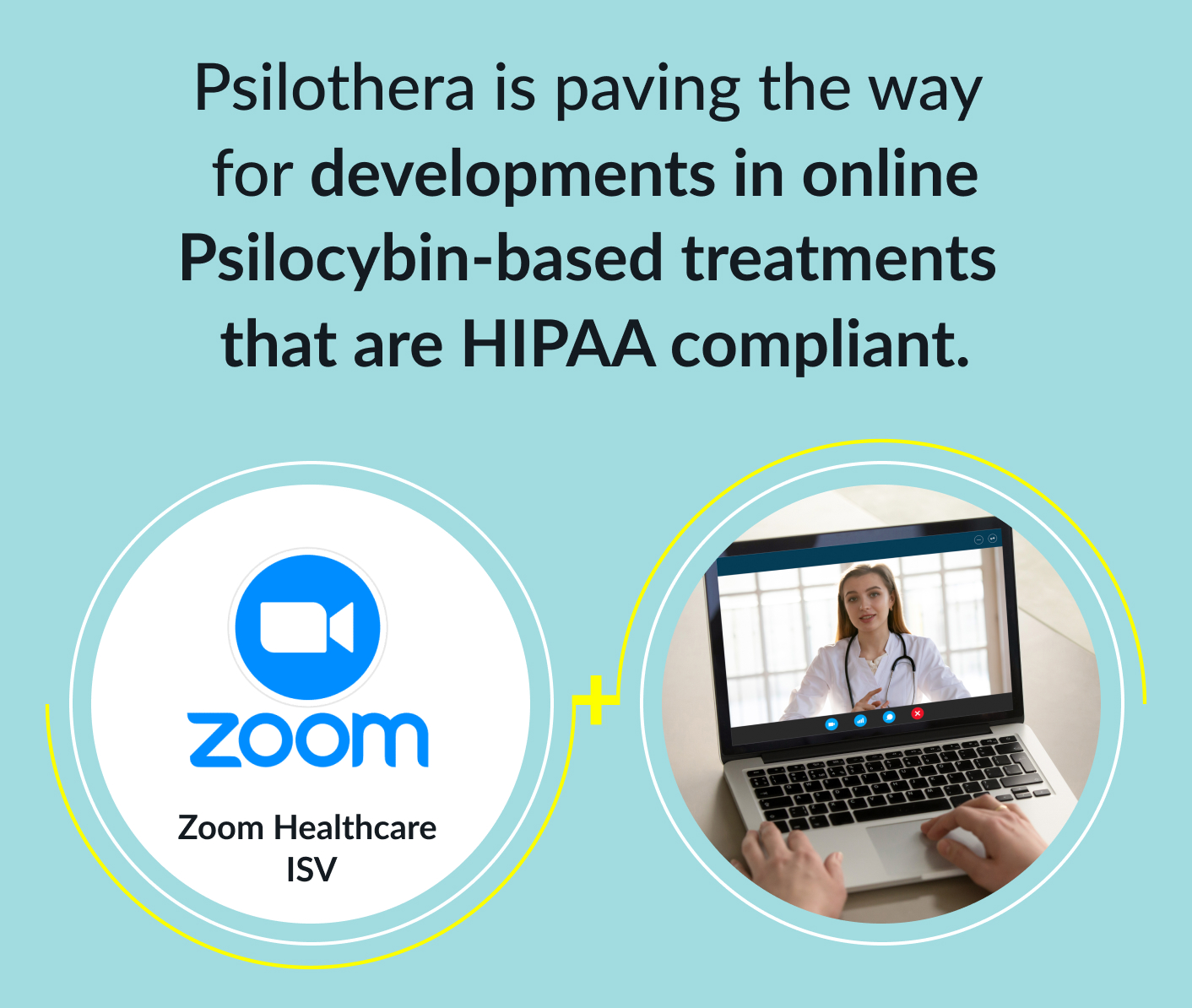 Psilothera is pre-revenue and our Fungi Grow & Lab is in its pre-launch stage. Once launched, the lab will begin researching, growing, and developing 20 different types of Psilocybe Cubensis, providing us with a robust portfolio of therapeutic fungi.

The varieties of mushrooms to be used in our formulations include Reishi, Lion’s Mane, Turkey Tail, Shiitake, Maitake, and Oyster. Reishi, for example, is being studied and used for its anticancer potential at the Memorial Sloan Kettering Cancer Center. Our Mushroom Nutraceutical product line for cancer patients is designed to support their current treatments program. 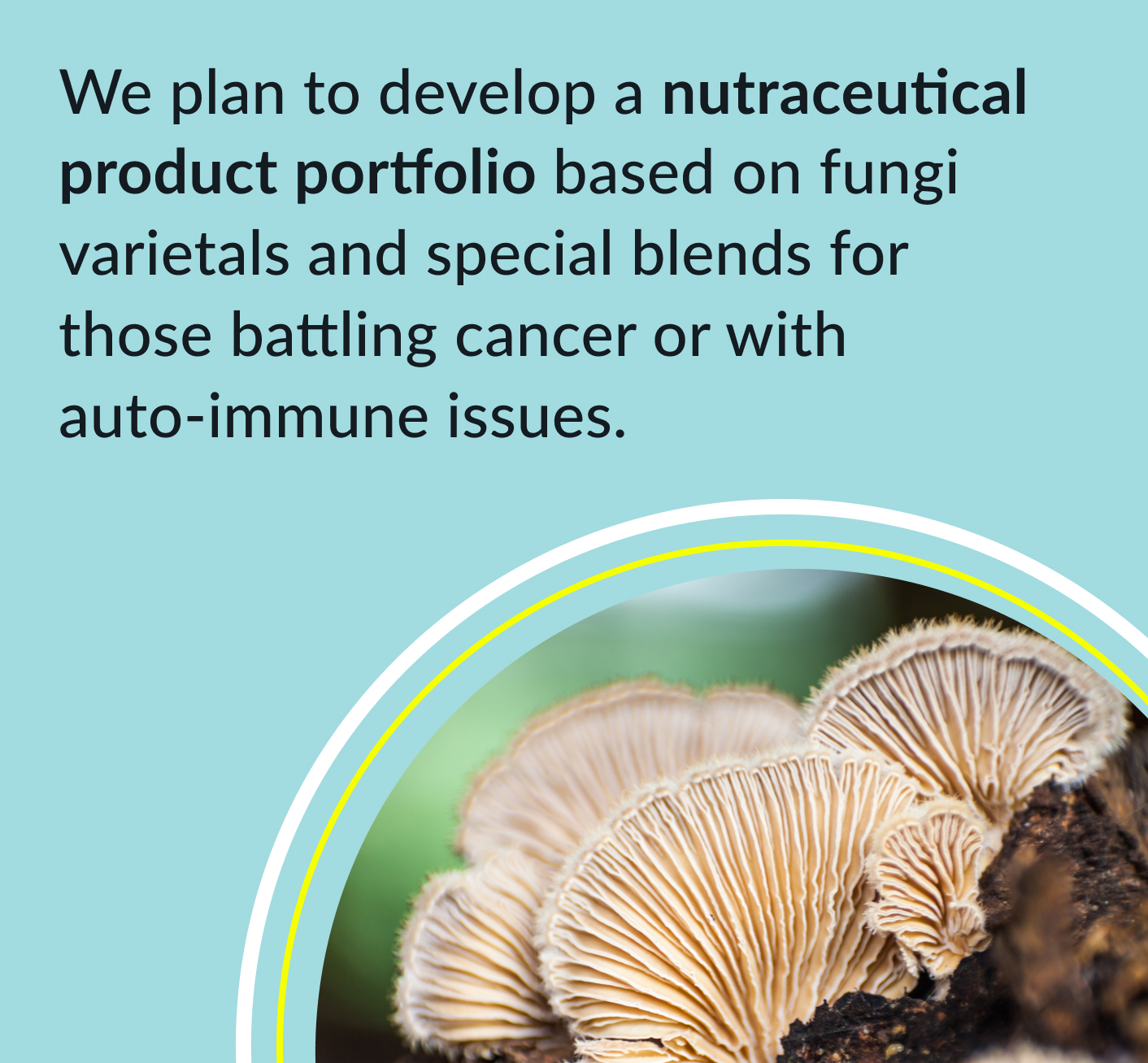 On a global scale, in November 2020, Oregon became the first state in the United States to legalize Psilocybin, allowing supervised use of psilocybin in a therapeutic setting.

Furthermore, voters around the country have decriminalized in Washington DC, Denver, Oakland, Ann Arbor, Houston, Somerset and Cambridge, MA so far. Psilothera projects widespread movement towards Legalization and Decriminalization by 2023. 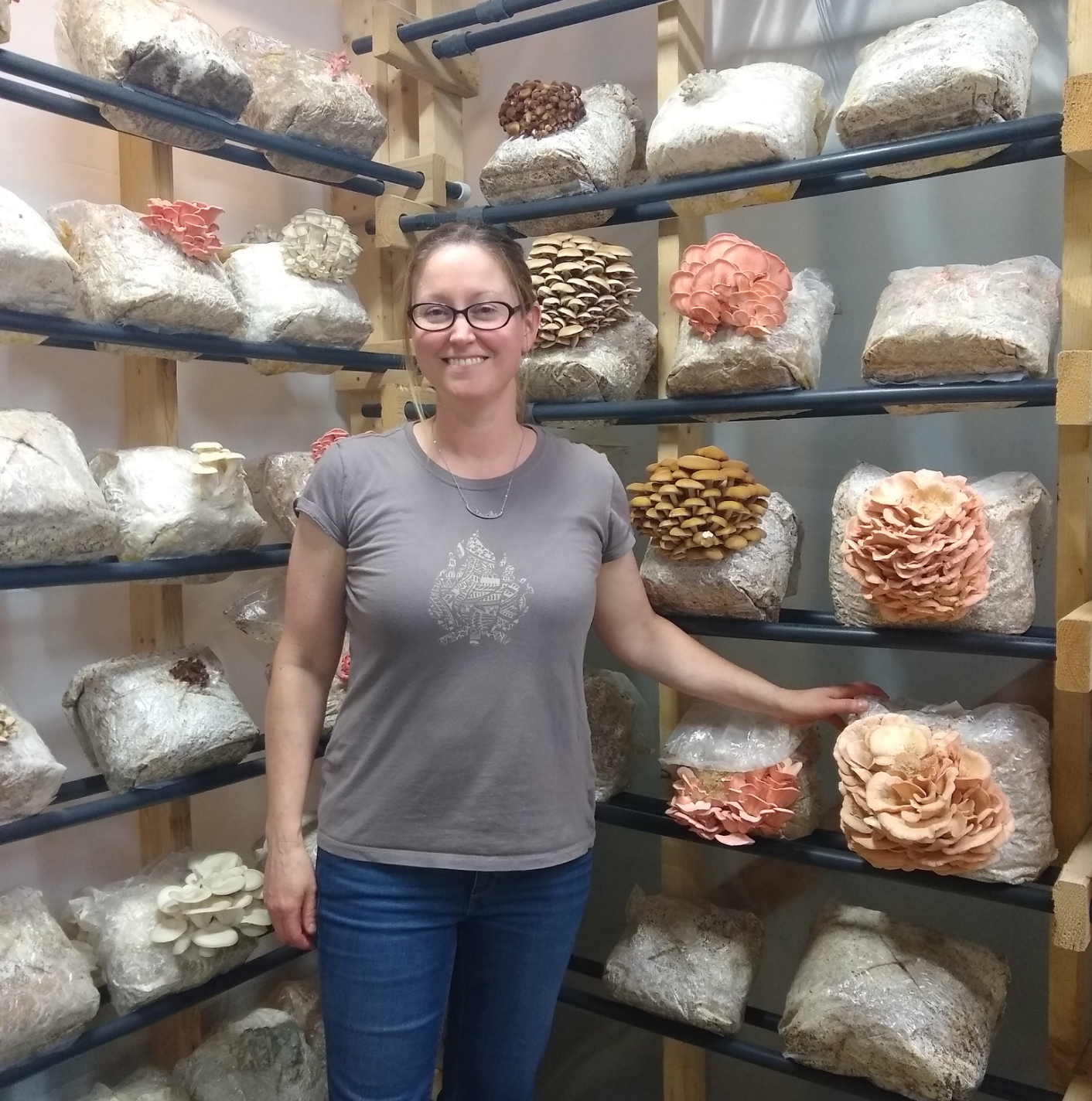 
The time to invest is now

A major paradigm shift is occurring in the healthcare sector. Breakthrough medical studies, a string of groundbreaking legalizations, and an unprecedented public openness to psychedelics has paved the road for Psilocybin-based therapy to be a legitimate alternative to pharmaceutical products. Psilothera aims to deploy this cutting edge medicine to establish itself as a beacon of hope, wellness, and compassion in the mental health market.

Annual sales for antidepressants, ADHD, anxiety, and anti-addiction medications well exceed $30 billion, and an increasing number of studies are showing a potential for Psilocybin and other psychedelic-based therapies to be as or even more effective than their pharmaceutical counterparts, meaning potential billions in revenue.

Our mushrooms aren't magic. They're therapeutic, backed by science. We believe they're the future of mental health treatment. 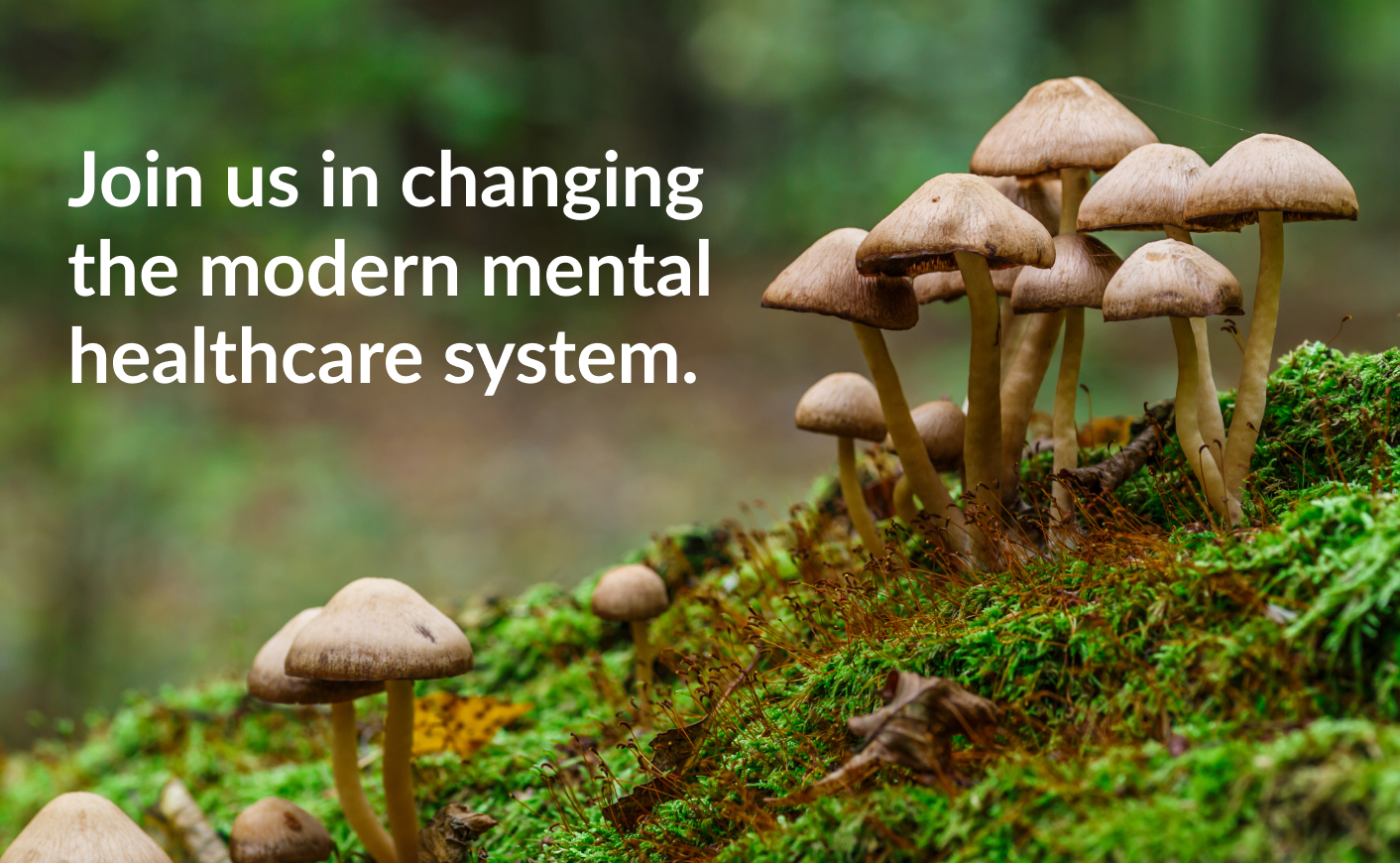 *Maximum Number of Shares Offered subject to adjustment for bonus shares. See Bonus info below. Note these perks do stack with the other offering perks. You will only receive the highest level bonus share perk you are eligible for.

Invest in the first 72 hours and receive 10% bonus shares.

*All perks occur when the offering is completed.

Psilothera will offer 10% additional bonus shares for all investments that are committed by investors that are eligible for the StartEngine Crowdfunding Inc. OWNer's bonus.

This means eligible StartEngine shareholders will receive a 10% bonus for any shares they purchase in this offering. For example, if you buy 100 shares of Common Stock at $5.00 / share, you will receive 110 shares of Common Stock, meaning you'll own 110 shares for $500. Fractional shares will not be distributed and share bonuses will be determined by rounding down to the nearest whole share.

This 10% Bonus is only valid during the investors' eligibility period. Investors eligible for this bonus will also have priority if they are on a waitlist to invest and the company surpasses its maximum funding goal. They will have the first opportunity to invest should room in the offering become available if prior investments are cancelled or fail.

Investors will only receive a single bonus, which will be the highest bonus rate they are eligible for.

Jacquelyn Wright-Minogue, MS, PMP has over 30 years of pharmaceutical industry experience. Jackie first joined Schering-Plough in the pathology area. She then moved onto basic research and clinical research in several therapeutic areas such as pathology, virology, allergy and immunology, oncology and rare diseases.

Her cloning, RT-PCR and DNA sequencing knowledge and skills led her to an adjust professor teaching position at a Kean University where she taught master level courses in DNA sequencing. Feeling the need to get closer to the patient experience after 20 years in basic scientific research, Jackie leaves Schering-Plough/Merck, and moves onto Novartis to work on oncology trials.

Working on clinical trials for medulloblastoma in children and basal cell carcinoma. The drug was approved by the FDA as sonidegib for locally advanced basal cell carcinoma. From big pharma, Jackie moved onto a small biotech company called Amicus Therapeutics where she quickly advanced to her current role as Sr. Director of Clinical Operations.Jackie helped spearhead and enrolled the largest ever trial in Pompe Disease in record time, keeping patients on study during a global pandemic.

It is her life mission to get medication to those in need. During the pandemic more people are suffering from mental illness than ever before. Jackie believes that this unmet medical need could benefit from a healthier, natural option with less side effects than traditional medicine.

Chaplain Chuck's notable  career and experience in  treating or training the Military, brings unique qualifications and understanding to help PsiloThera lead a  Veteran & 1st Responder based  psilocybin mental health treatment program. It is important to note, that a psilocybin therapist assisted  patient  treatment experience has been expertly described as where  "Science and  Spirituality Meet."

Chaplain Chuck has served for 25+ years in a leadership and 1st Responder role and capacity to provide Mental Health & Spirituality Care to Military Personal & their Families.

Chaplain Chuck trained hundreds of military personnel once a year in suicide prevention for 16 years. He has also been Certified to Train First Responders on suicide intervention. An Iraqi Combat Vet, he has served 25 years in the military as an Army Chaplain and as a Behavioral Science Specialist.

"Chaplain Chuck is my one and only Brother. IMO, No one better to  lead a program  to help save and heal our  Vets and 1st Responders where spiritual and scientific approaches to achieve better  patient outcomes  can be explored."

Like any Industry your brand and brand  message is important.

We filed  U.S. Trademarks Applications for the following Trademarks:

Thanks for your support!

Below is an outline of of what we shall accomplish in Phase 1.

Thank for your interest and consideration.  We would like to invite you all into our Ohana & Family of Investors.

As you might know, PsiloThera, Inc. has exceeded its minimum funding goal. When a company reaches its minimum on StartEngine, it's about to begin withdrawing funds. If you invested in PsiloThera, Inc. be on the lookout for an email that describes more about the disbursement process.

InvestorPlace selects PsiloThera as a "Best Startup to Invest In!" 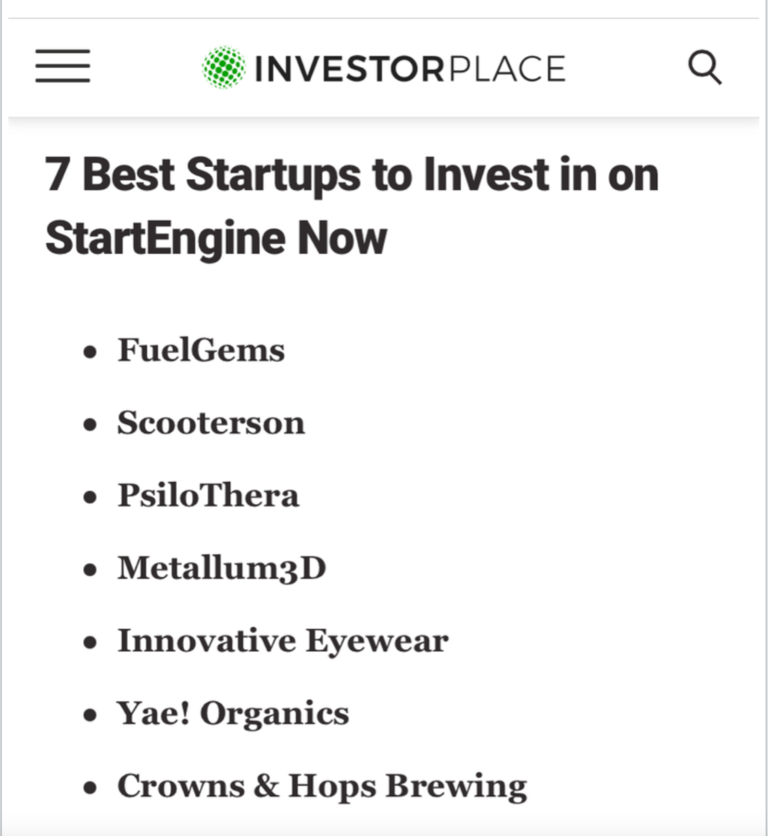 PsiloThera CEO, John Atanasio states,”PsiloThera  is among the first companies focused on developing novel therapeutics by deploying Quantum Technology  that can collect and send materials through organic devices.“

”PsiloThera’s strategy is to have its products lead the future of energy-based nutrients and medication delivery systems.”  “Quantum technology may lead to advances that could ultimately change the way that Humans digest supplements, medications and nutrients.“

“Our Quantum Technology Advisors projects that the technology projects  to deliver significant improvements in areas  of Pharmaceutical dispensing issues and adverse effects.”

“Quantum Technology may  lead to significant reductions in drug development time and costs, giving PsiloThera a possible major competitive advantage if that were to prove true”

The Journal of American Medical Association- “JAMA PSYCHIATRY” reported in a 2020 study that a treatment of Psilocybin “Magic Mushrooms” works much better than usual anti-depressant medications.

You may be eligible for an additional bonus with your investment!