Changing the World, One Blockchain at a Time

Changing the World, One Blockchain at a Time

Website Website
Miami, FL
Technology
The Blockchain Institute of Technology provides high quality, credentialed education and certification in blockchain technology cost effectively and at scale. Our mission is to empower the full potential of blockchain by expanding access to professional training in the technology.

This Reg CF offering is made available through StartEngine Capital, LLC.

Get rewarded for investing more into Blockchain Institute of Technology:

The global blockchain market is predicted to grow from $3 billion in 2020 to $39.7 billion in 2025, but there is a lack of resources for certified education in the technology.
The Blockchain Institute of Technology has received a federal trademark for education services and certification to train and provide verified certificates in blockchain technology.
We already have more than 100,000 enrollments from over 180 countries in courses and certificate programs developed by BIT.

In 2020, blockchain was the #1 job skill sought out by employers, but there are only a limited number of professional, credentialed education and professional certification options to help train talent in this highly demanded area. In 2021, the need for training blockchain professionals is becoming even more necessary as blockchain and cryptocurrency startups received more funding in Q1 2021 than in all of 2020, and employers are actively hiring tech workers in the hottest job market since the dot com era. 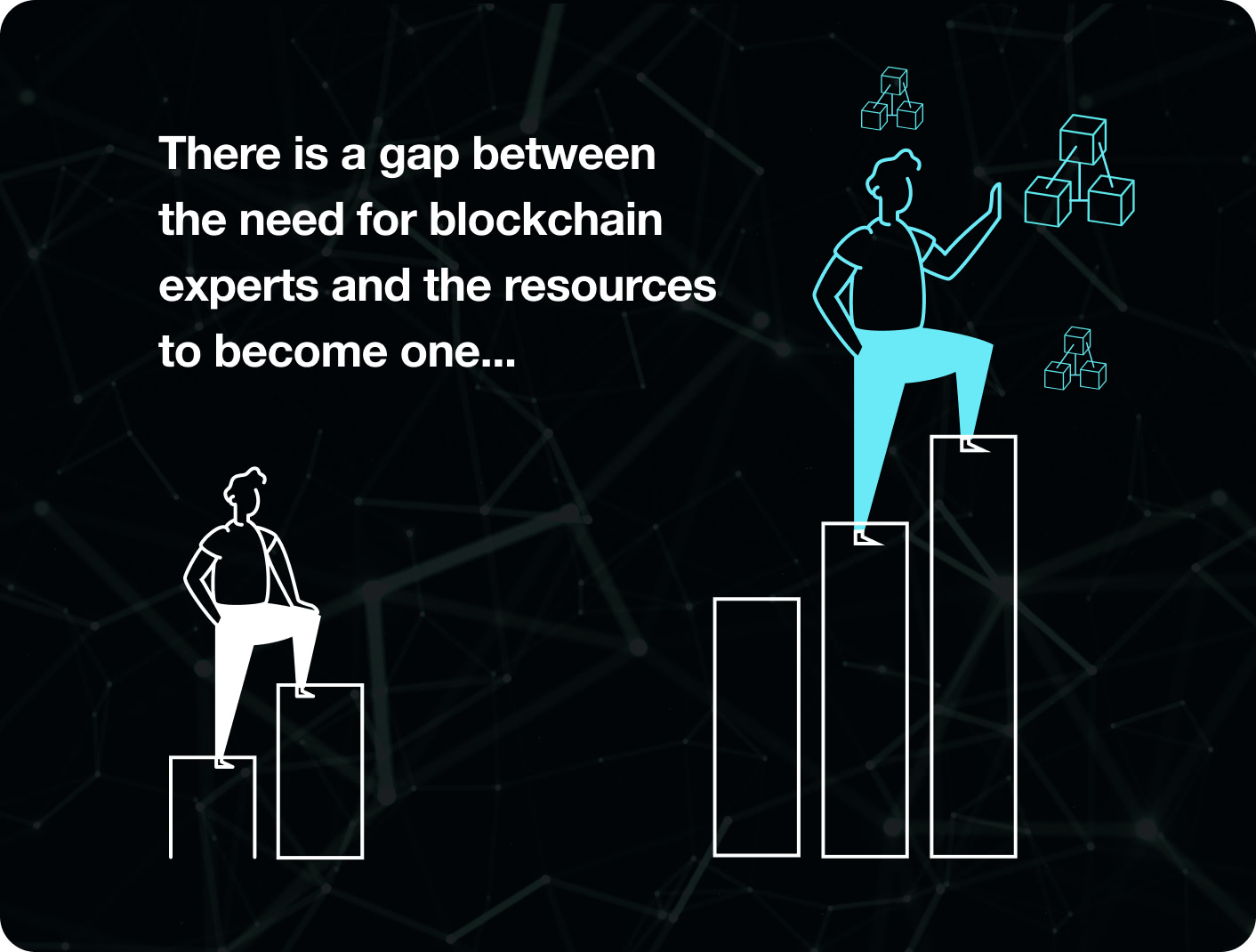 This shortage of talent skilled in blockchain and cryptocurrencies is having a negative impact on businesses looking to capitalize on the opportunities presented by these fast-growing markets. 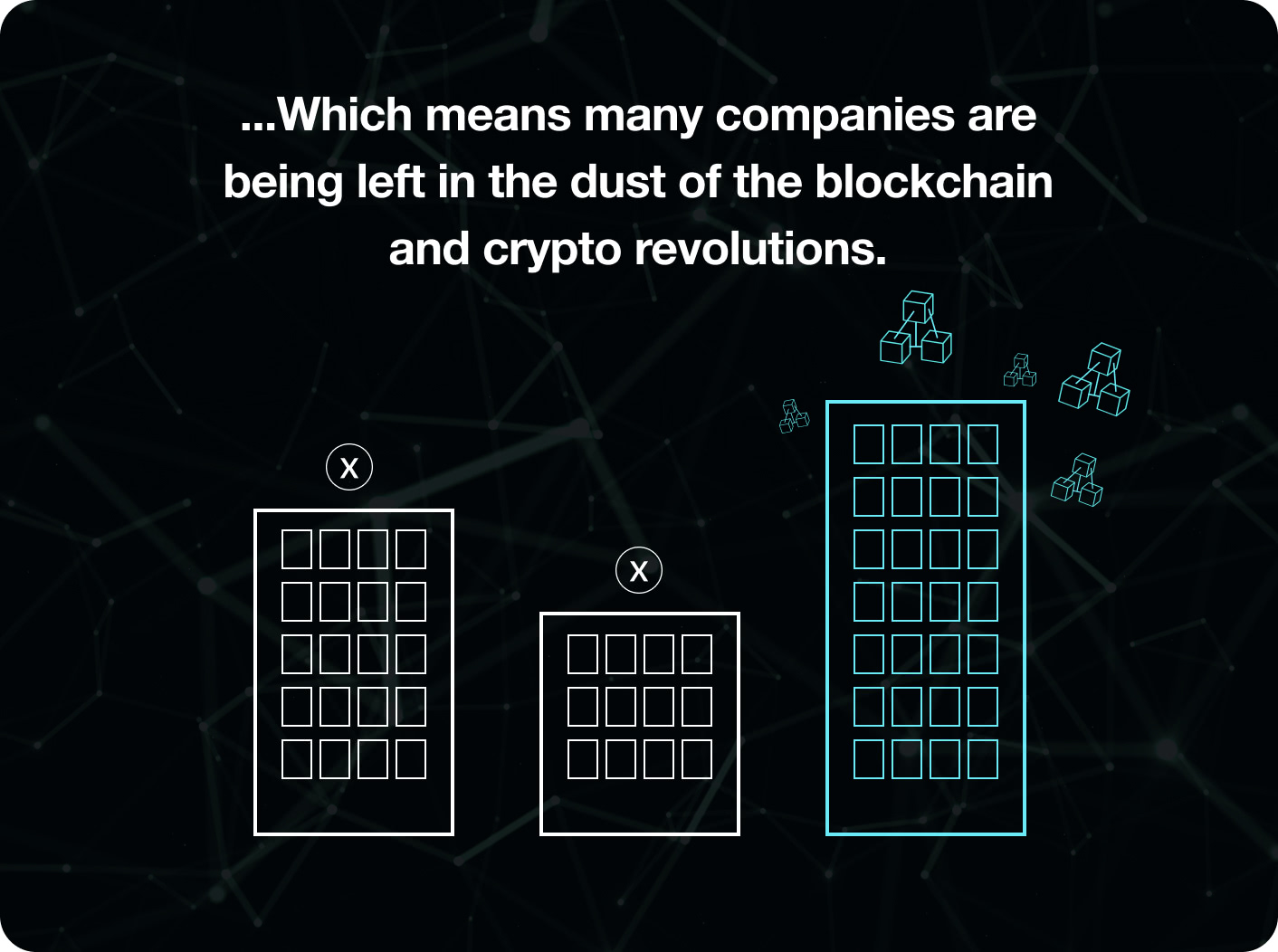 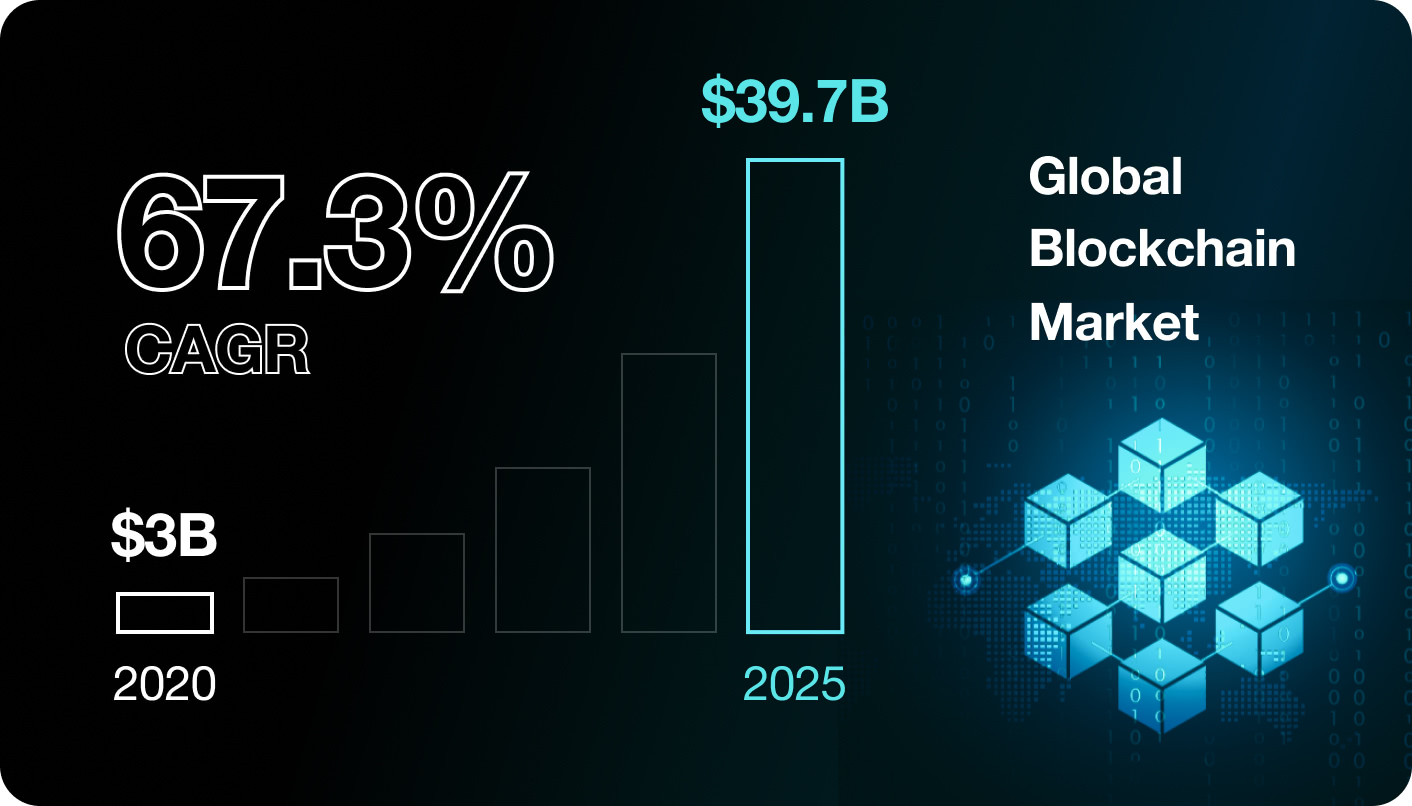 By 2030, it is predicted that blockchain technologies could boost the global economy by up to $1.76 trillion. 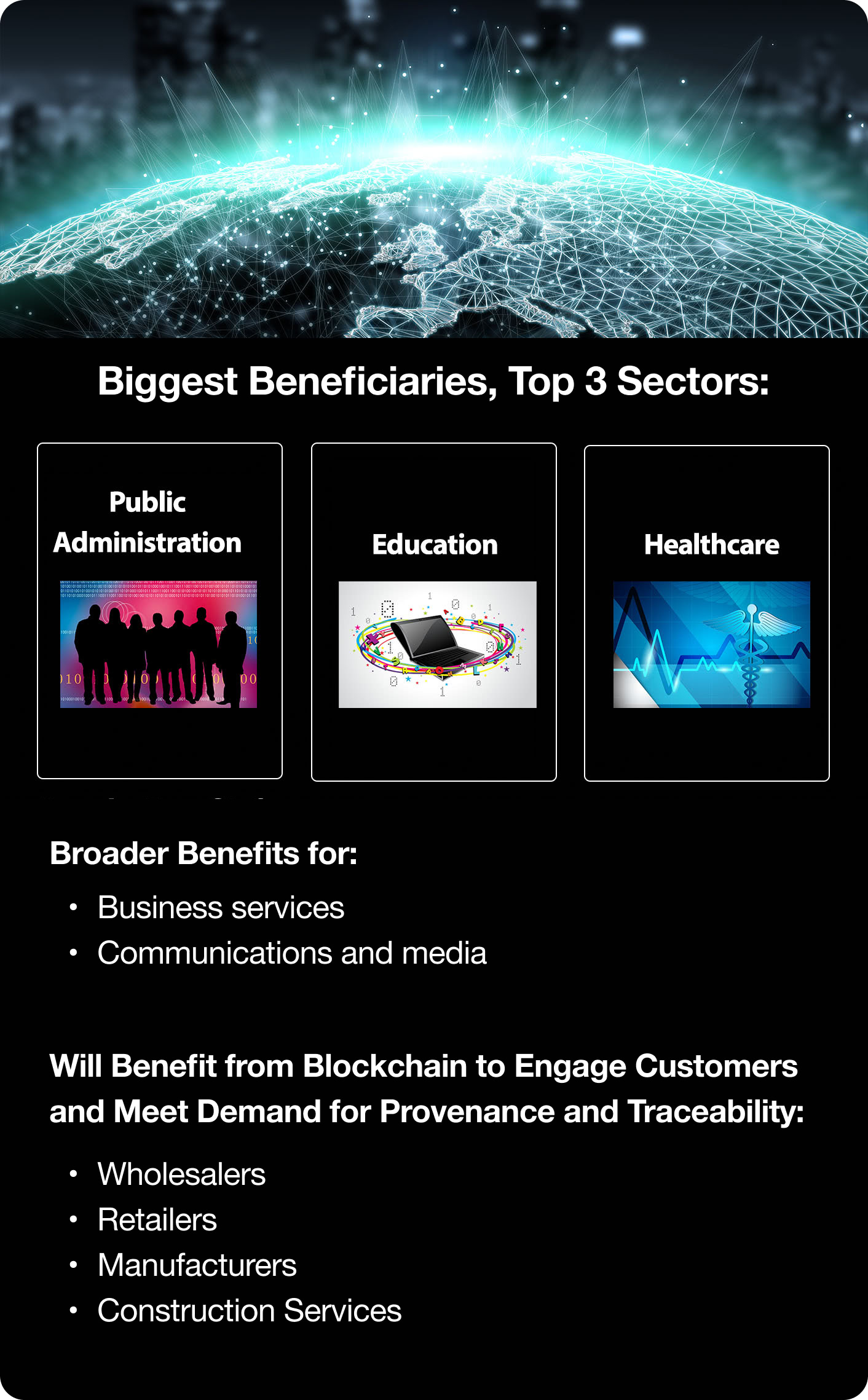 We address the needs of our customers by developing and offering customized training and professional certification solutions in blockchain, Bitcoin and cryptocurrency that combine the following elements:

By leveraging these elements, BIT is able to deliver fully credentialed blockchain and cryptocurrency professional education and certification at scale, while prioritizing quality, time, and budget for our customers. 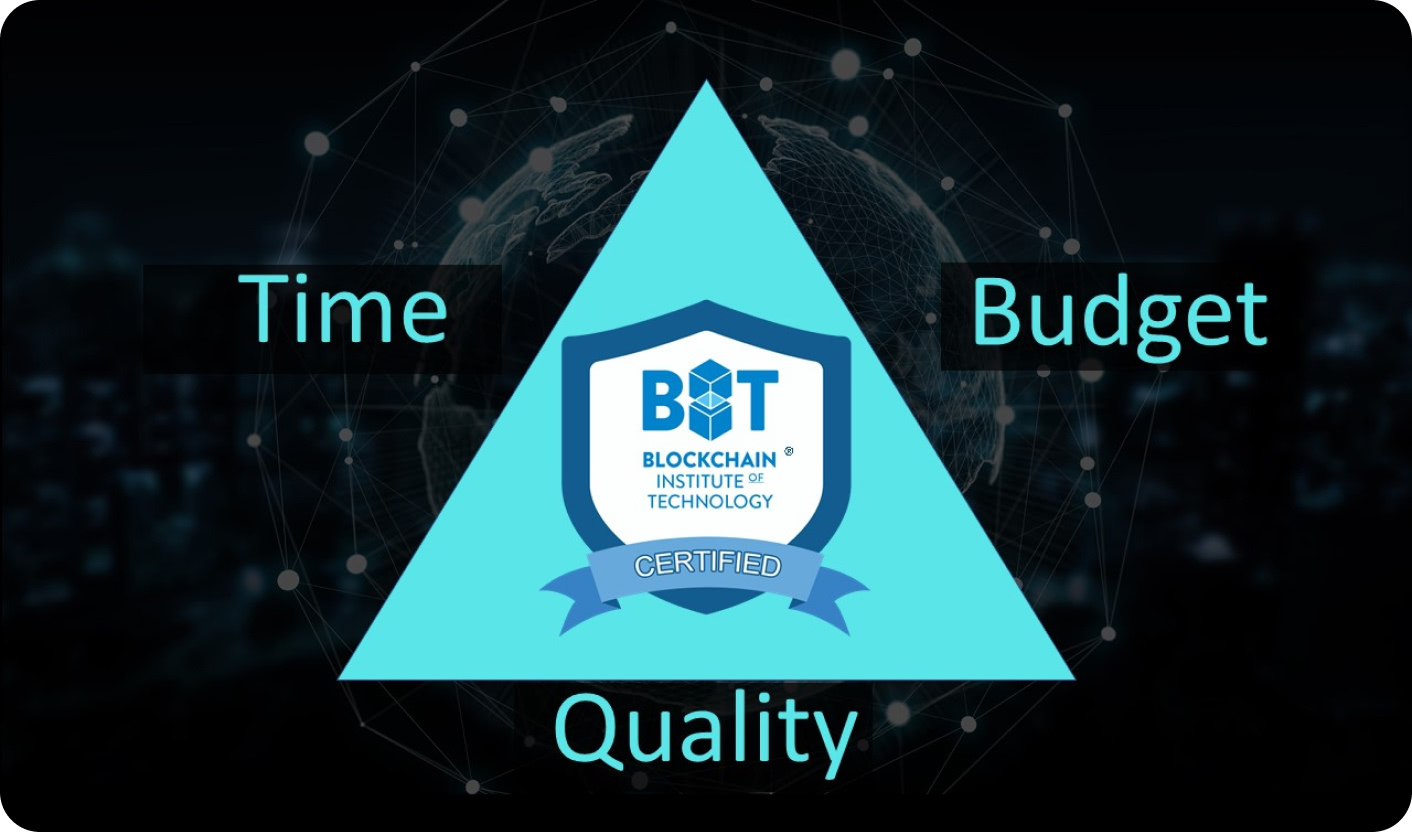 Unlike many other education and certification providers, BIT’s educational offerings and digital certificates can be delivered over the Internet anytime, anywhere.

In addition, each certificate issued by BIT is recorded on the blockchain to assure authenticity, and can be verified independently for accuracy. All certifications  and educational materials have been reviewed and are approved and credentialed by Foundational Technologies Institute, a third-party professional credentialing organization.

There have already been more than 100,000 enrollments in courses and certificate programs developed by Blockchain Institute of Technology by students in over 180 countries.

In addition, we have developed and delivered corporate trainings to senior executive teams for the following companies and organizations: 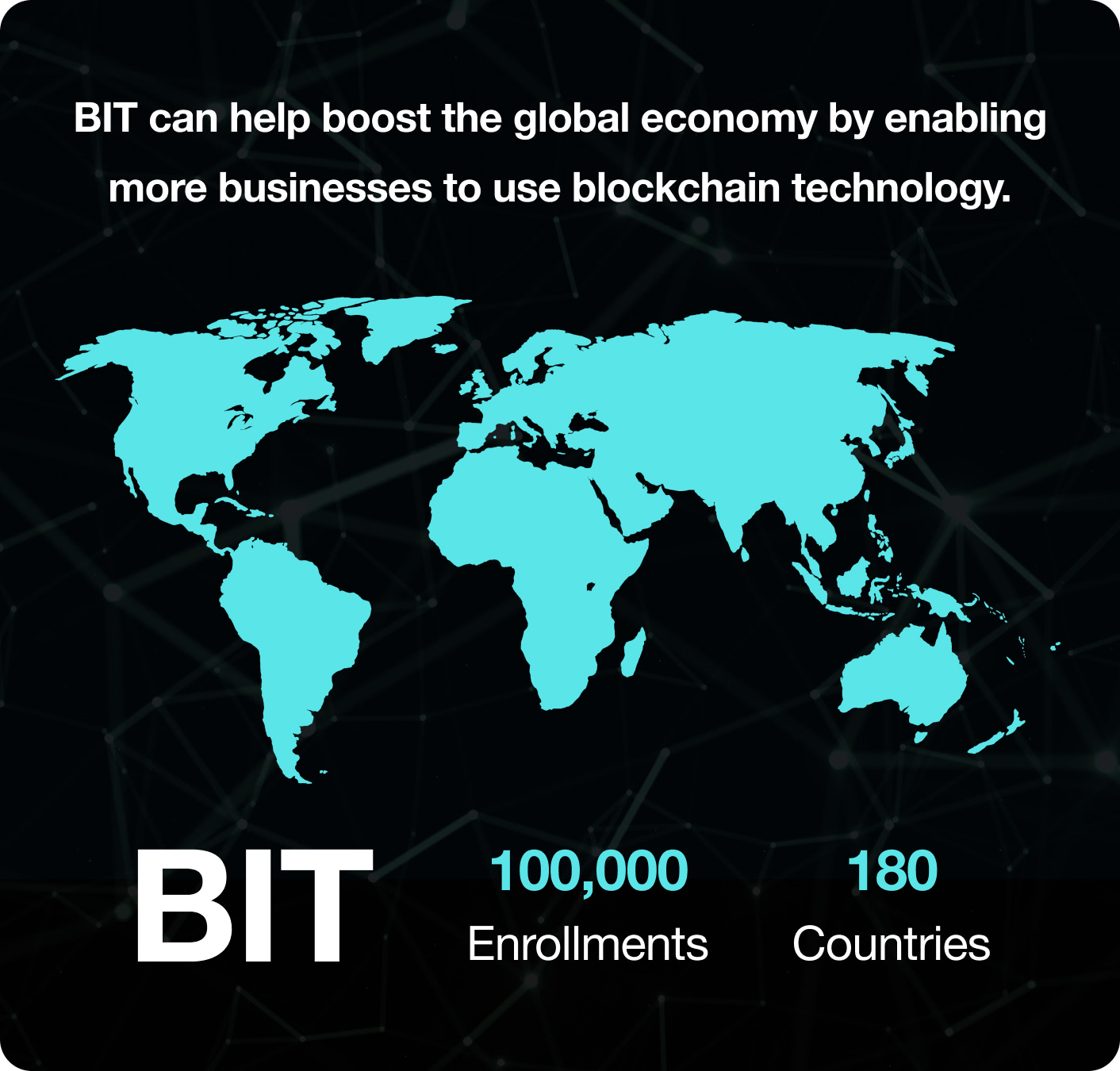 
Empowering the Full Potential of Blockchain

At BIT, we have witnessed first-hand the power of the $3 billion blockchain market. Businesses need to incorporate blockchain and train their staff in these technologies in order to remain relevant.

We believe our product stands ahead of the market, with a first mover advantage. We have a proven scalable business model and an advanced third-party credentialing system to provide BIT’s blockchain verified professional certificates.

We hope you’ll join us as we help train and certify the skilled workforce needed for the current blockchain and cryptocurrency global business transformation. 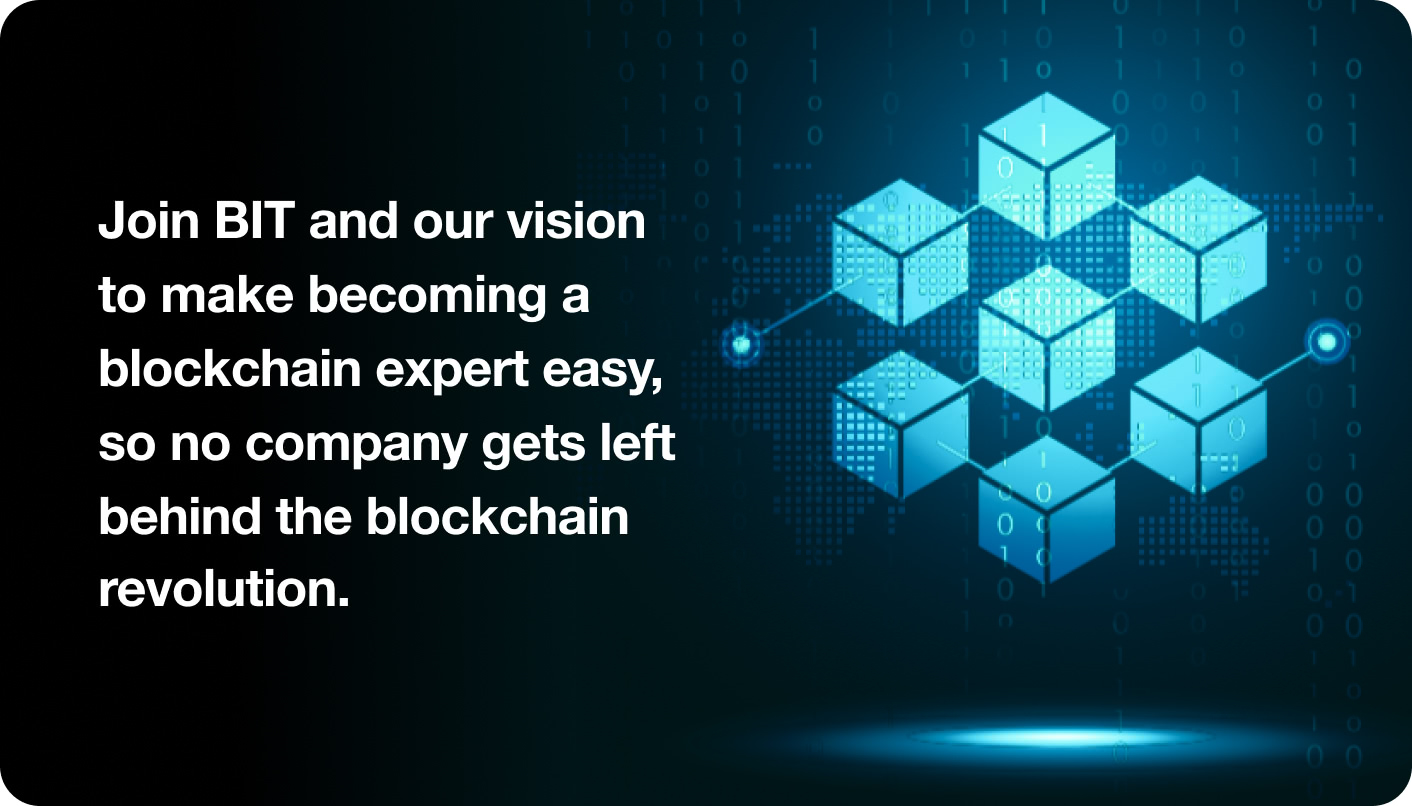 *All perks are optional by investor & occur after the offering is completed.

Blockchain Institute of Technology, Inc. will offer 10% additional bonus shares for all investments that are committed by investors that are eligible for the StartEngine Crowdfunding Inc. OWNer's bonus.

This means eligible StartEngine shareholders will receive a 10% bonus for any shares they purchase in this offering. For example, if you buy 100 shares of Non-Voting Common Stock at $0.10/ share, you will receive 110 shares of Non-Voting Common Stock, meaning you'll own 110 shares for $10. Fractional shares will not be distributed and share bonuses will be determined by rounding down to the nearest whole share.

This 10% Bonus is only valid during the investors eligibility period. Investors eligible for this bonus will also have priority if they are on a waitlist to invest and the company surpasses its maximum funding goal. They will have the first opportunity to invest should room in the offering become available if prior investments are cancelled or fail.

Investors will only receive a single bonus, which will be the highest bonus rate they are eligible for.

We will not incur any irregular use of proceeds.

Miami Art Week is taking place this week, and many leading NFT artists from all over the world are in the city presenting their work.

Blockchain Institute of Technology is right in the middle of all this activity, and sponsoring a leading NFT Crypto Art Hackathon  - Full Text

Along with all the activity in the NFT space, enrollments fo BIT courses and certifications have surpassed 130,000 worldwide, and we are in full production of a new course series to be launched shortly.

Find out more about all that Blockchain Institute of Technology is doing in the video above.

Blockchain Technology Keeps Growing Along With the Need for Blockchain Education

As the impact and application of blockchain technology and cryptocurrencies grows exponentially, companies are seeking to hire blockchain trained staff in record numbers.

To address this growing talent scarcity worldwide, Blockchain Institute of Technology is delivering globally on our mission of providing high quality, credentialed education and certification in blockchain technology cost effectively and at scale.

- "According to LinkedIn, U.S. job postings for “crypto” and “blockchain” positions have skyrocketed 615% in August, compared to the same period last year."  Full Text

- "ConsenSys is creating 400 jobs globally as part of its bid to make blockchain and decentralised finance mainstream." Full Text

- "A year-over-year increase of +102% in headcount across top blockchain game devs indicates that talent is likely to become a major bottleneck in search of the killer app." Full Text

-  “Twitter Crypto will underpin all of this work and serve as a ‘center of excellence’ for all things blockchain at Twitter. We’ll be hiring for roles in engineering and product." Full Text 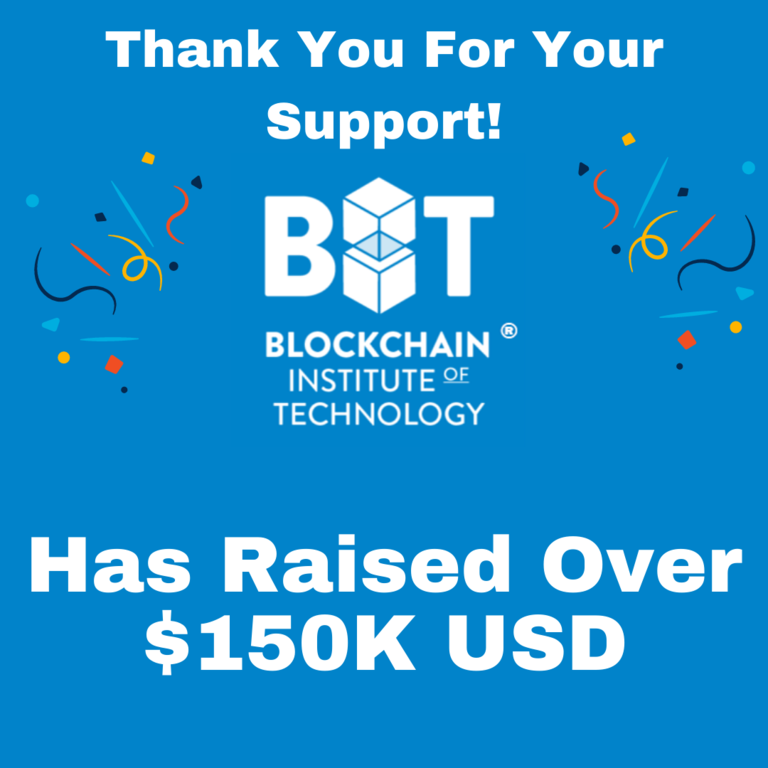 As the price of Bitcoin has been reaching new all-time highs, and the NFT market has been driving millions of dollars in new investments, the Blockchain Institute of Technology has been enrolling thousands of new students worldwide into our courses and certifications, and we have been actively involved and investing in expanding internationally.

In this latest update, we share with you some recent developments on how we are successfully delivering on our mission.

Changing the World... One Blockchain at a Time.

Changing the World... One Blockchain at a Time. 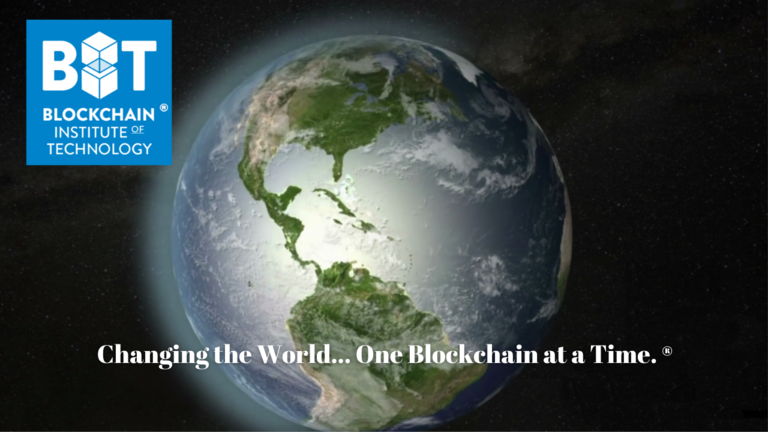 Blockchain technology and cryptocurrency are all over the news as they transform multiple industries, and their effects are causing many positive changes in the world.

With all these developments and the growth of the blockchain and cryptocurrency markets, the need for cryptocurrency and blockchain trained talent is growing dramatically, and BIT is addressing this need globally and at scale.

- Russian Blockchain Experts Are Offered Almost x5 the National Average Salary - Blockchain-related salaries are rising fast in Russia – with developers also starting to command higher salaries than most of their IT professional peers. Full Text

In Miami [The city where Blockchain Institute of Techology headquarters are located]:

- Miami has a new source of income: cryptocurrency - City officials can now dip into a digital wallet that has at least $4.3 million worth of a new cryptocurrency — called MiamiCoin or $MIA Full Text

- Miami Mayor to Take Full Paycheck in Bitcoin -  That makes Mayor Suarez the first known U.S. politician to get 100% of a paycheck in BTC. Full Text 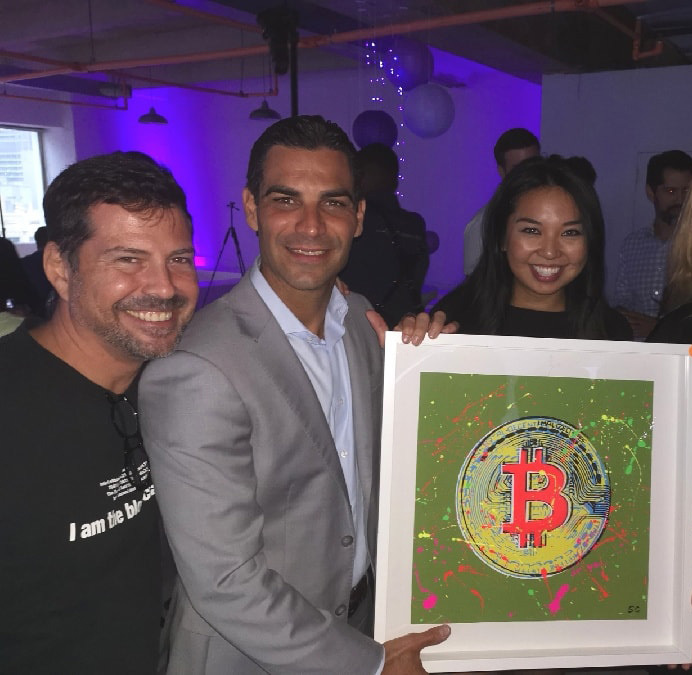 Blockchain technology is transforming and disrupting multiple industries, the cryptocurrency market keeps expanding, and the fast growth of the NFT market is driving billions of dollars in sales and investment.

With all these developments and the growth of the blockchain and cryptocurrency markets, the need for cryptocurrency and blockchain trained talent is growing dramatically and BIT is addressing this need globally and at scale.

Below please find five notable quotes that speak to the strength of the conditions in the blockchain and cryptocurrency markets, and the need for blockchain professionally trained talent.

- Cryptocurrency and blockchain jobs listings skyrocket in 2021 - Indeed says the success of the cryptocurrency industry has resulted in a 118% jump in career postings for work in the field compared with last year. Full Text

- Why Hollywood is suddenly embracing the blockchain, crypto, and NFTs Full Text

We have enrolled thousands of new students this month, coming from 190 countries worldwide.

In this latest update, we are pleased to share that we have added over 2,500 new students in our courses from 190 countries worldwide, and to let you know about some very exciting new developments at Blockchain Institute of Technology.

In this recent piece published on El Nuevo Herald, the second largest Spanish-language news outlet in the United States, BIT is acknowledged as a leading education and certification provider in blockchain technology for people seeking to be employed in High-Paying jobs in blockchain and cryptocurrency. 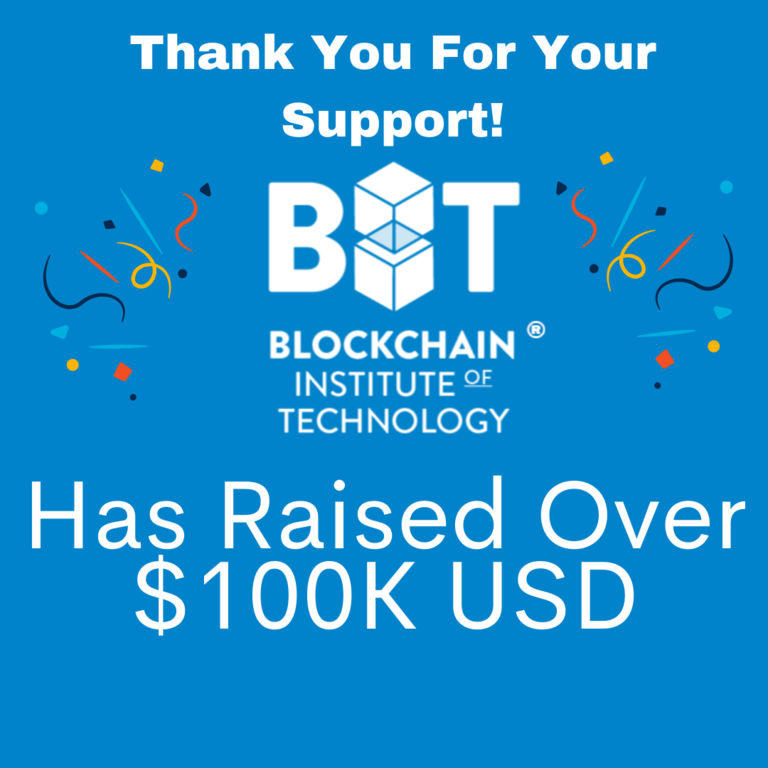 Blockchain Institute of Technology is Capitalizing on NFT Market Growth!

Blockchain Institute of Technology has been enrolling thousands of new students worldwide into our courses, and we have been experiencing large increase in enrollments due to all the market interest in Non-Fungible Tokens (NFT).

BIT's educational content is in a class of its own, and we are capitalizing on the market opportunity being presented by the NFT market.

Sam Rauch serves on the board of advisors for BIT and provides expertise on blockchain architecture and software development. He is a Certified Blockchain Professional (CBCP) and AWS solutions architect with more than 20 years experience developing emerging technologies solutions. The creator and architect of multiple active blockchain projects, we are very proud to have Sam Rauch as an advisor to Blockchain Institute of Technology. 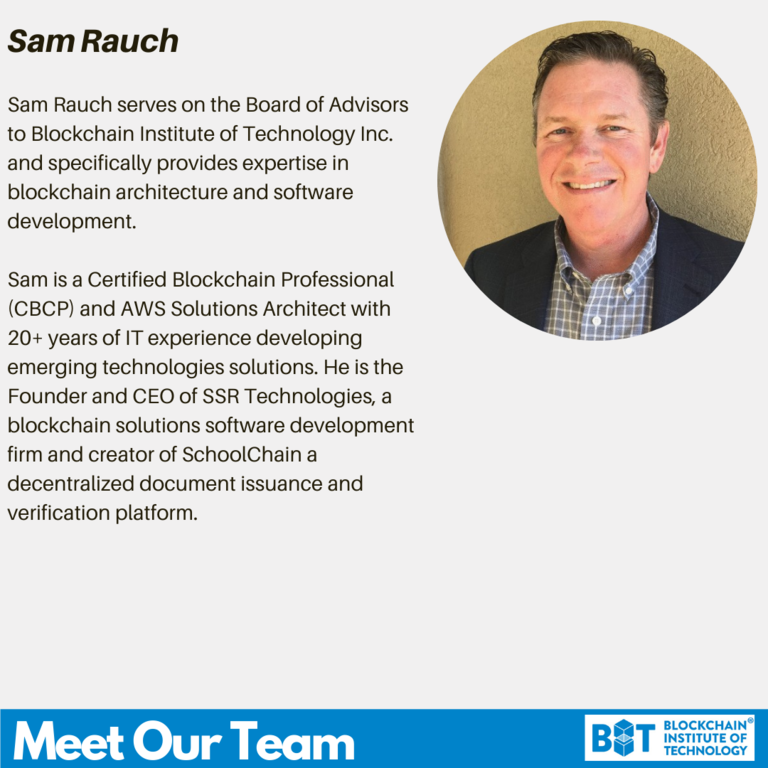 When it comes to expanding our impact in the education sector, learning systems and our growth strategy, we are proud to have Marcelo Burbano as an advisor to Blockchain Institute of Technology! 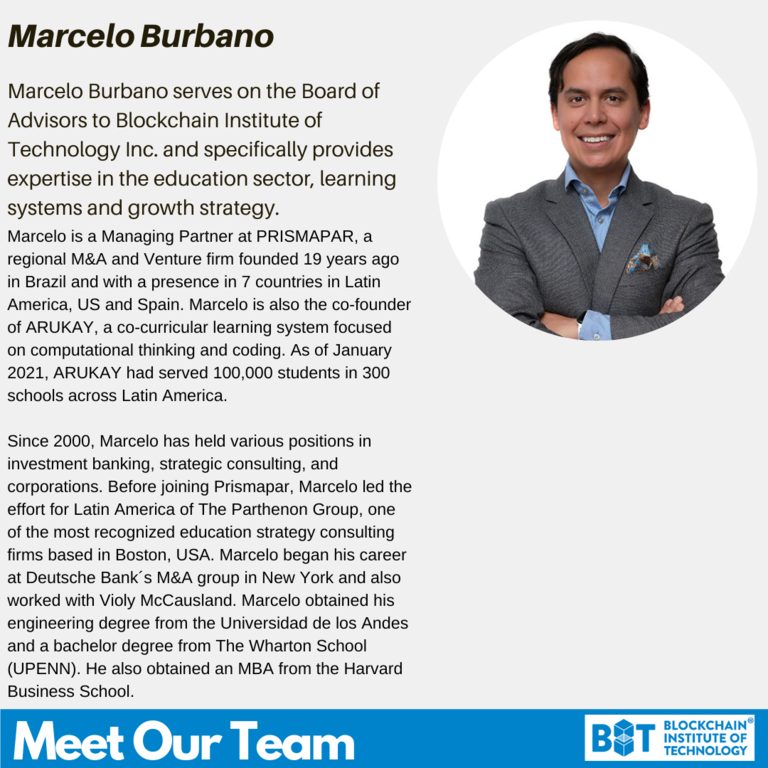 We hope you are doing excellent.

We would like to take this opportunity to begin  introducing you to our team, and our ongoing efforts, so you can get to know the people behind Blockchain Institute of Technology and what we are up to.

In the coming weeks we will be sharing regular updates with you,  so please stay tuned and thank you for joining us! 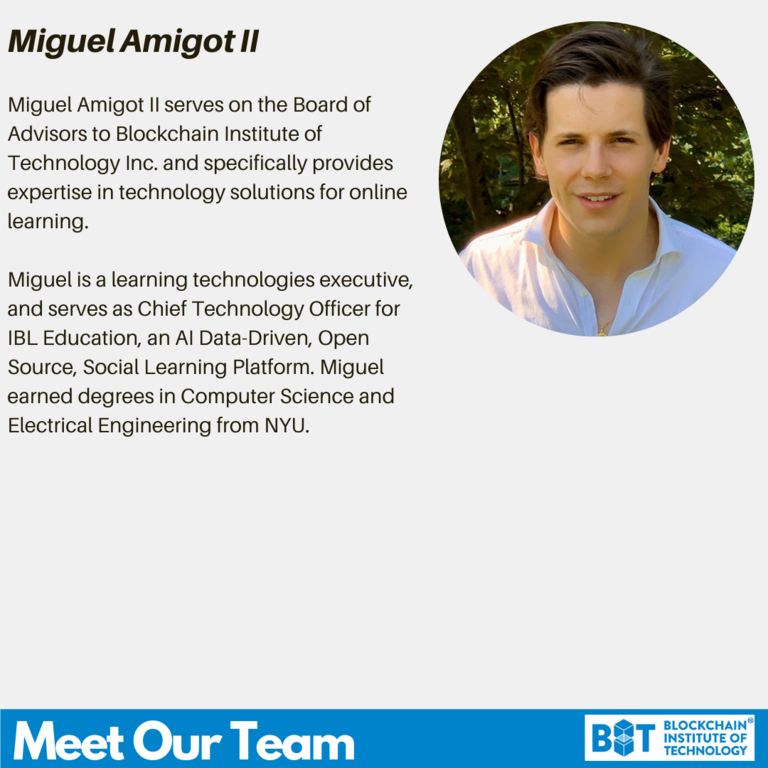 You may be eligible for an additional bonus with your investment!